Why does the Red-crowned crane have a red head? 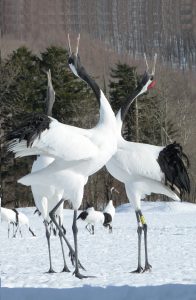 One of the most striking characteristics of Red-crowned cranes is their red head.

So then, why is it that the head of the Red-crowned crane is red?

People are sometimes not aware that the red part of the head is actually skin, not feathers, covered with numerous detailed wart-like protrusions which appear red due to blood in subcutaneous blood vessels becoming visible.

Red-crowned cranes begin to lose their head feathers about one year after birth and, at around two-years old, are basically completely bald.

It is really this baldness which is the true sign of adulthood in Red-crowned cranes.

Furthermore, if a crane becomes anemic due to illness or injury, the head color will become faded, close to orange or white, which is one of the indicators for us to know the state of the bird’s health.

Considering it in a different light, what would be the reason for this baldness?

For example, the fleshy bits around the heads of chickens (comb, wattle, lobes etc.) are red due to the development of subcutaneous capillaries, but this is to increase the amount of skin directly exposed to the air, thus helping to regulate body temperature.

An impressive crest also serves other purposes like attracting females and intimidating rivals.

As another example, scavengers such as vultures are bald so that unwanted dirt and bacteria don’t stick to the bird’s down, thus reducing the risk of infection.

So, what about Red-crowned cranes?

One thing is, it’s likely it’s nothing to do with protection against infectious diseases, since they’re not scavengers.

Is it beneficial for breeding purposes, then?

Also, the red part becomes larger when dancing and during courtship, so it is considered helpful for communication and breeding amongst Red-crowned cranes.

However, we don’t honestly know if there are individual differences in the size and color of this bald area, so we think it probably has nothing to do with the reproductive fitness of each individual.

※カメラ調整中
Delivery from Tancho Observation Center.
It is a live delivery of winter limited (Nov-March).

Camera No. 1 is in front of Tancho Observation Center
Camera No. 2 is in the state of the biotope.